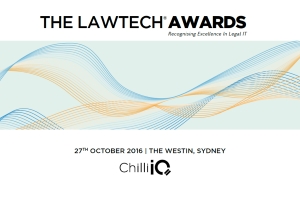 For the first time, this year’s Chilli IQ Lawtech awards were presented separately from the Lawtech conference itself.  Held as a formal evening and gala dinner at the Westin in Sydney, the function was well attended and was a testament to increasing emphasis being placed by firms on legal technology and innovation.

There were also some exciting new categories introduced this year, designed to honour ‘green IT’,  leadership and the achievements of outstanding individuals.

It is not surprising that this year saw some particularly exciting and innovative nominations, with fierce competition across a range of categories.

Expand for a list of all award categories and winners

Three common attributes of the shortlisted nominations for the ‘Innovation in Legal IT’ award included:

One notable thing none of the shortlisted nominations shared:

It was extremely encouraging to see so many nominations of excellent quality and purpose. We are living in exciting times, where any firm that wants to make their mark and create a point of difference, can do so.

The future for law firms willing to embrace technology to solve their client’s problems looks bright. For myself and the other judges tasked with selecting a winner this year, I am pleased to say that it was an incredibly difficult decision. 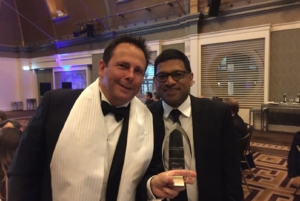 Steven provides law firms with IT strategy and direction. He is passionate about assisting firms to extract more from their technology investments and discovering technology enabled opportunities. Steven presents regularly in the legal sector and contributed to the George Beaton e-book, NewLaw New Rules. He formed NextLegal in 2014 to provide law firms with greater technology insight, advice and capability.

A lack of legal technology harder to hide